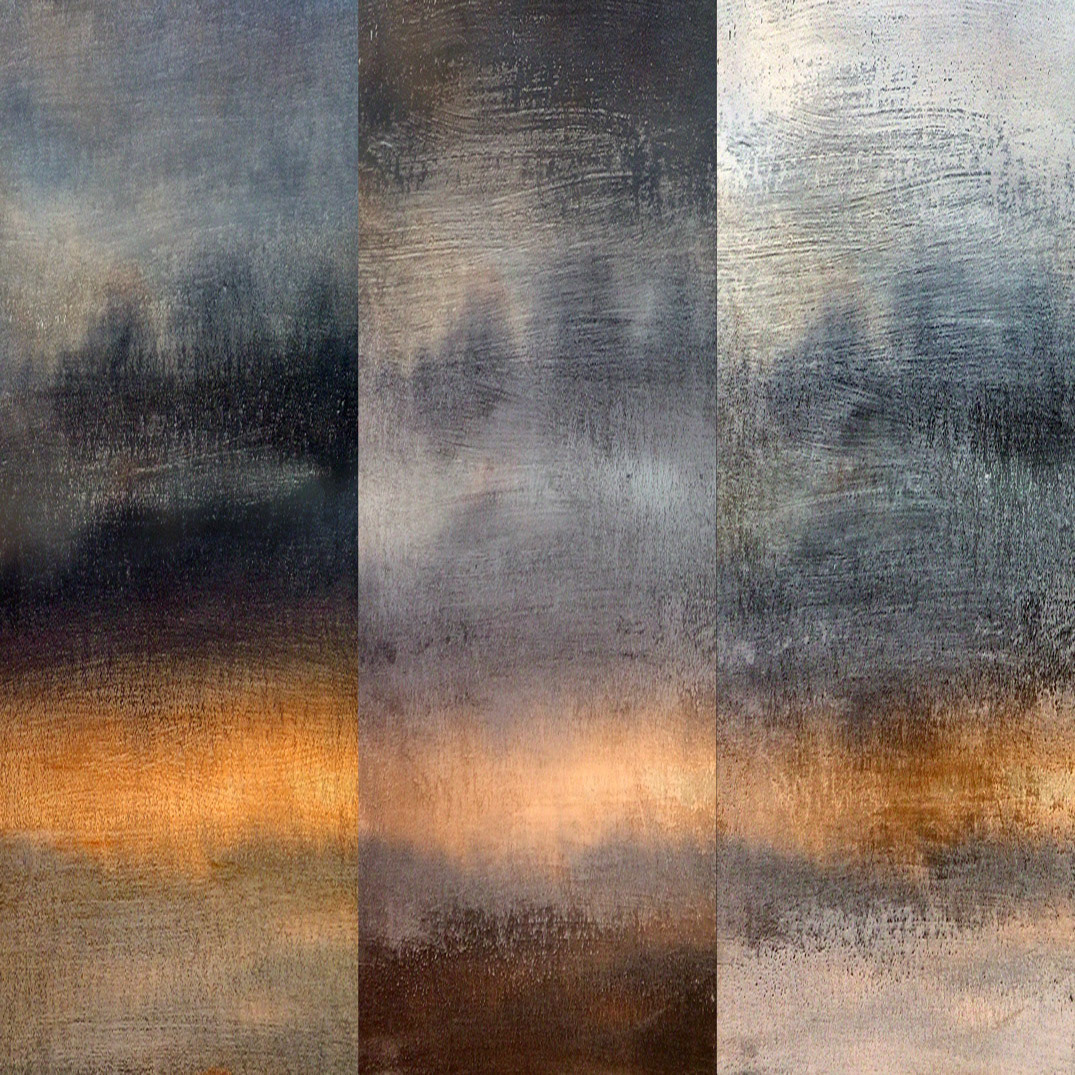 Essay 2 with its numerical landscape
Diptych with two plexiglass prints. The first, electronic collage of photographic horizons, and the second, digital image constructed with numerical sources, 40 x 53.1 in (19.7 x 53.1 in each), 2014-2007.

HORIZON LINE - OTHER PORTRAITS OF LANDSCAPES
Photographic Installation
Other Portraits of a Landscape are a series of 9 back-light photographs of collages with torn Japanese paper, assembled in Polaroid boxes. A look away reads the images as photographs of real landscapes. It is only by looking closely that the torn paper is identified. The set arranged next to each other, forms a horizon line. When the series is arranged with the dark side down, the landscape is diurnal. When on the contrary, the light part is downwards, a night landscape is seen. 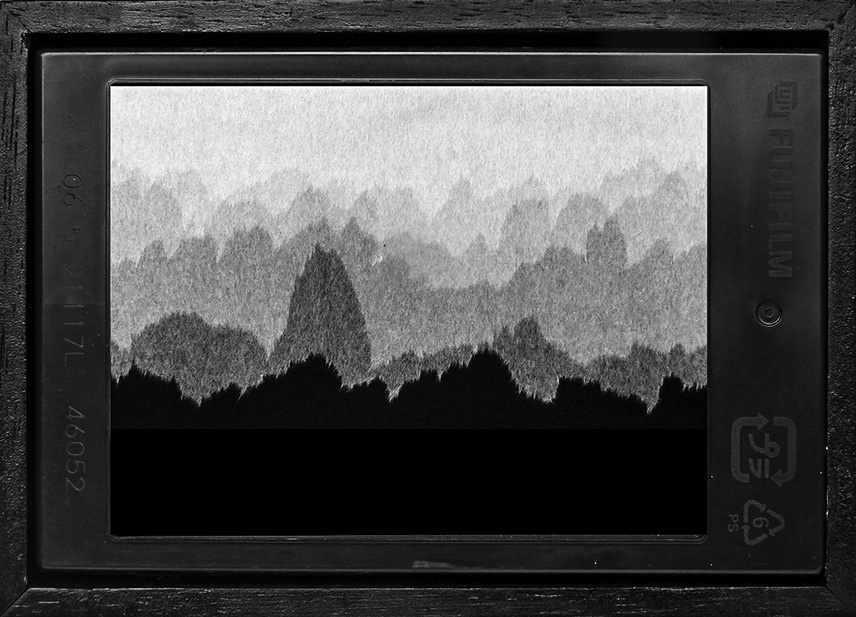 Other Portrait of a Landscape 2, showing a day view. 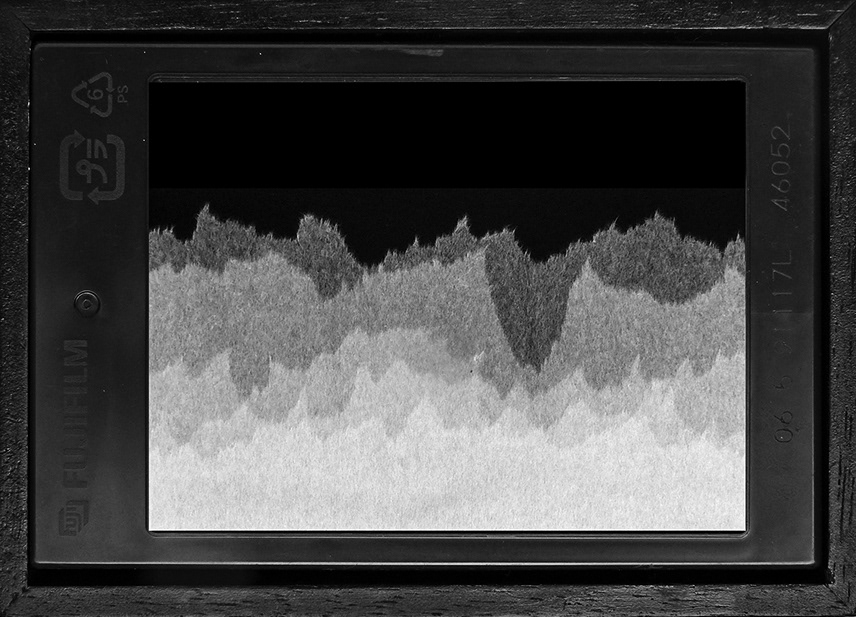 Other Portrait of a Landscape 2, showing a night view.

VERTICAL CONDENSED HORIZON
2014
Digital image constructed with eleven photographs of things and horizontal situations that the eye perceives on a daily basis. The pixel resolution of the photographs was radically reduced, and then radically increased, in order to eliminate definition of the content. Then, the images were gathered and stacked to form a vertical horizon.

Eight open books with pages made of white torn Japanese paper are lined up on two showcase tables of 82.7” x 11.2” x 32.3” height (each), designed for the installation. The overlapping pages constitute an atmospheric perspective of horizons. This allow the construction of a composite image that expands horizontally and can be read on both sides. On one side, the image composes a dawn and on the other, a dusk. In the case of placing the covers upwards with the books open, a line also forms. In the same way, closed books make up another figure.

Box with eight books from the installation HORIZON IN 8 VOLUMES.

Perspective of the showcase glass table.

Elevation of the showcase glass table, front and side views.

HORIZONS - SOME WORDS
HORIZONS are landscapes from an undefined field between reality and fiction. They are places of dream, of desire, of reunion with our primordial human condition.
HORIZON is the “circumscribed”, the “achievable”, the “present time limit”. It is a referential concept that gives us the conscious perception of “SER”[1] and “ESTAR”[2] here and now. The horizon define a potential of possibilities and range of motion, in which the AR we breathe is contained. It is a realm of existence in the world.
In large urban centers such as São Paulo, dense "verticality" is dominant and interrupts the field of vision. The surrounding space has shrunk radically, and with it, the AR and the prospects for movement. We almost don’t see horizon anymore. There is a feeling of suffocation and claustrophobia. How to adjust to this reality?
The constructed poetic images are mutants and hybrids fictions of horizon & space. They attempt to subvert the "verticality" of the configuration of the urban space, so to make visible the horizons contained in the little things of everyday life.
Works of these two series present some crossings between the media that constitute the contemporary image. Paintings, photographs and videos resulting from experiments and actions of the sensitive body function as autonomous pieces or as base elements for compositions of hybrid works. Media blend and dialogue with each other. The immobility and movement of the images, their flatness and volume when incorporating the shape of the objects in which they are inscribed, instigate a reflection on the relationships they establish with space and time.
The various forms of the image today converge to a same territory. This makes increasingly difficult to differentiate it into categories, both in terms of technique and in terms of the way of representation and presentation. Intermediate zones expand and constitute a common place in which nature and origin are lost, where the limits between physical reality and fiction are dissolved.
The works seeks to reveal the common aspects nowadays between painting, photography and video. What is pictorial, cinematographic, photographic and sonorous in the contemporary image? The idea is to investigate the potentialities and the implications that arise from the complexity of it.
[1] “BEING” refers to a permanent condition – expansion of time.
[2] “BEING” refers to a transitory location or condition – expansion of space.

SEARCHING FOR THE SKY

SANDY'S GARDEN
↑Back to Top